In the morning I tend to resemble Grumpy Cat. I’m pretty upfront about that. My body has a different idea of the day’s cycle (I mean, I’d probably do well as a vampire lol), so when someone mowing woke me early and the pain pills hadn’t kicked in, storm clouds started gathering. *failing at an innocent look* The mailman soon cheered me up with packages from Amazon, thankfully, and I opted to give raging at the world a rest for a bit. (Before those that know me say anything, I added “a bit”. The truce may not hold if the chocolate hides from me later. You have been warned. Plus, we all know that it’s just a matter of time before my sarcasm comes out to play. Put some chocolate on the table and just back away slowly. It’d be wise not to say anything too. Lol.) Anyway, the first box had the new silicone mold in it that I’m going to use for the pancake soaps.

I put my pop can in view for a size reference. We all know how much I suck at measurements, so I didn’t realize they’d be a realistic size. To help with the syrup dribbles I also got some injectors. I saw them on a soap crafter site with tips on how to help prevent soap from setting inside of them, and if I can get the technique down, these will be awesome. (I know – they’re originally for giving oral medications to animals, but soap crafters are well known for using things from the daily world for crafting, so what the hey. *grin*) 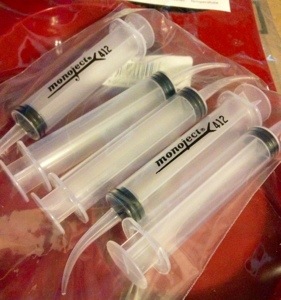 I think the pancake stack soaps have the potential of being even cuter than the Splish Splash Ducks. *performs a teeny chair dance*

Despite my excitement I’m a bit distracted, though. My mind has a habit of fixating (as if that’s a new piece of insight *cracking up*) and the last few days have been no different.

You see once upon a year (ugh, let’s not visit the exact number please. Meh. Lol.) I had been writing poetry and vignettes for a few years when suddenly during my Current Events class “I am the grim reaper of your dreams…” started repeating over and over in my mind. Admittedly it was a surprisingly grim phrase to go on loop, but I couldn’t shake it. I finished my work before the rest (yep, I was that student lol) and wrote the line. Within ten minutes I had finished the first draft of my poem, which I ended up using a few years later in an international competition.

Around fifteen years later… *cough* (we’ll go with that number and just move on, okay?)…random ideas will plague me just like “Grim Reaper” did. A children’s book series, several poems, and a few careers spawned from these odd occurrences and yet again I’m being plagued. This one is seriously weird though. I learned years ago, the hard way, that I’ll feel like I’m going insane if I don’t work with these phrases somehow, so I’ve been trying to figure out how to please this demon. “Under the Boulders” keeps repeating in the style of “Under the Boardwalk”, although it’s all about the “over the shoulder boulder holder” (that’s a code for bra, brassiere, a sling for the girls, whatever term you like, just in case you didn’t have a really fun loving mom like me that taught her daughter the song early on). *laughing* All I can think of is either a refreshing lotion or drying powder for the heat of Summer that’s coming on. I think I’ll leave “the boulders” out of the marketing though. *grin* Can you imagine witnessing a customer being stopped in the aisle in Wal-mart? “Excuse me, Ma’am, but I love whatever scent you’re wearing! Could you please tell me what it is?” With a blush the customer replies “Well, it’s Under the Boulders Bewbies Refresher.” *shaking head* And people thought that Poe was…interesting. Hah! “They ain’t seen nothin’ like me.” 😉

I had a tiny bath and body business which focused on pampering. Since the business had to close due to health reasons, I write post about a variety of topics, ranging from Invisible Diseases and being a Spoonie, to fun and DIY things.
View all posts by Georgia's Pampering »
← Breakfast Anyone?
Breakfast with Gummy Worms →