A Short Stack and a Stroll

It’s actually taken me a few days to finish everything up so that I could write about all of it. Thankfully my insomnia (never usually used together, but for once it was handy) helped me get quite a bit done in the wee hours.

One night I had the random weird thought that I could retry the pancake mold and do red velvet pancakes instead. I figured that it would let me experiment with the new brown dye and a red that I seldom ever use, plus try the new technique that I read about using a monoject for fine line soap decorating. The camera didn’t capture the color quite right, but it’s a medium brown soap with a hint of red to it. I ended up doing two thin pancakes for a short stack (three looked weird for some reason).

While those soaps were cooling I spotted that hot pink powder pigment that I was so excited about months ago, but never got around to trying. I have to clarify a possible misconception here. I like pink, sometimes a lot, and pampering myself, more than a lot, but I’m not a girly girl usually. I discovered about a year ago that hot pink for some reason makes me feel like a badass. Especially when it’s paired with black. There’s that little “Oh, I’m feminine” and then a bit of “And I’m obnoxiously in-your-face. Whatcha gonna do about it?!” I know, I have issues, but don’t judge. We all have our little badass quirks. Mine is oddly focused around a color. Lol. So… I got out the gorgeous packet and broke the seal with what was most likely an evil smile. Since it was 6AM by this point I decided I’d only do a few small star soaps and that Cotton Candy FO seemed to fit this soap. *Starts fidgeting now and whistling innocently* Now, keep in mind that I hadn’t slept in nearly 24 hours at this point. I wasn’t in a highly intelligent mode by then. But I was still as stubborn as ever and wanted to finish up. Figured it out yet? I totally screwed up when I added the pigment. I don’t usually ever use powder pigments and it honestly never hit my sluggish brain that it has to be incorporated differently than the regular stuff. I sprinkled the powder into the melted soap and watched as it chunked up like bad gravy clumps. Even whisking like I was possessed didn’t save the soap. However, I saw hot pink and my badass side whispered to just go for it even if it’s all wrong.

The stars are kind of cute with the concentrated spots and I plan to play it off as though I wanted this all along. The hint of glitter in there just adds to that feeling that it was all done on purpose. I was concerned about people actually turning hot pink though when coming into contact with those clumps, so one star sacrificed itself to some rigorous use. No body parts were harmed in this test and I remained as pasty as Casper, so I’m declaring it safe. See, my badass side is totally cool with imperfection. Too bad that one doesn’t control my OCDs, but oh well.

Still high on my hot pinkness a few days later I unmolded the super chocolaty smelling pancake soaps and opened my special monojects. Being able to do find detail soap would allow me to carry out a ton of ideas that have been set to mute for now, because they need that extra special detail work. I melted some white soap, left it unscented, and sucked some up in the monoject. I rushed over to the short stack and tried to eject the soap while I swished my hand back and forth to do that fancy squiggle chefs do with icing or sauces. I tried so hard to depress the plunger that my hand actually hit the soap when the plunger finally sent itself flying backward. (There’s a tiny smudge that I tried to cover with the next round of “cream cheese”, but hopefully it’s not super noticeable.) Apparently getting the soap extra hot didn’t overcome how quickly it can cool in a thin tip.

So, yeah, that happened. Air is not stronger than quickly congealed soap and the air will fight to come out the only other path that it has, so make sure you’re wearing goggles. Lol.

It took several light burns and two days to get all traces of soap out. Seriously. Lol.

I ended up saving what soap I could and using a beaker with a spout to try and make the lines. Instead of looking like a fine chef did them it’s more like a kid using the frosting packet on those toaster strudel things. *cracking up* Here’s where I challenge the customer to just use their imagination a little. I tried. It’s still soap and won’t look like this anyway once you use it. It shrink wrapped up pretty perfectly too. Yay! Something went right! 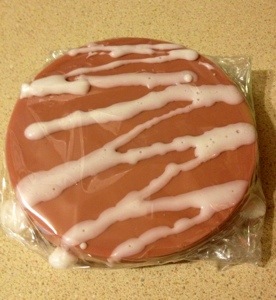 I decided to add the red velvet short stack to my basket that I’m donating for the raffle for the Sunset Stroll next month in Overbrook, KS. Although the event is now fundraising for all forms of cancer instead of just breast cancer, I stuck with some of the pink theme and aimed for a young girl themed donation for the first time. Fruity Patootie Bubble Wash, Fruity Loopy Goat’s Milk V2 Lotion sample, some of the hot pink star soaps, the stack, a bottle of Monsters Away, and a princess rubber duck all tucked into a heart basket with pink Easter grass. I kind of like it actually, even though the cutesy stuff doesn’t usually work for me.

Along with the basket I’m donating fifty of those heat sealed lotion packets that I love and am terrified of ever trying to make again. *laugh* I kind of think it’s worth the burns for such a sharp little sample.

So, maybe I’ll put on the hot pink and black striped scarf I just crocheted and get the nerve to make some more packets. Well, not today. I want to try to sleep and there’s a heat advisory warning all ready at 3:48 in the morning. I’d probably give myself heat stroke working in the kitchen with hot stuff while wearing a huge scarf. Lol. *raising my finger (and probably an eyebrow – that sucker moves around on its own like a thin caterpillar some days)* I will get my hot pink badass on and make more heat seal packets one of these days.

What gives you a super jolt of confidence? A red power suit or lipstick? Sleek leather pants? Naughty drawers that you keep a secret? Dare to share? 🙂

I have a tiny bath and body business. I focus on pampering with natural benefits, but also love to create some whimsical products too. I share about the creation process, new products, and other topics that matter to me.
View all posts by Georgia's Pampering »
← I’m Feeling Hot, Hot…oh never mind
Back in the Saddle →