I learned about two previously unknown skills that I have while trying to make pancake soaps. First, I am very good at creating khaki colored soap. Even more impressive than this special coloring skill, I apparently excel at creating a pink version of khaki. I used yellow dye and somehow managed to create a really pretty pink hue to the khaki soap. *cracking up* These previously unrealized skills may come in handy at some point, and I appreciate them, but they weren’t very useful this past week. Lol.

I attempted to correct the pinkish khaki soap to match the general hues of pancakes…um, apparently that’s a skill that I still lack despite quite a bit of practice. *grin* I never managed that golden grilled color, but after I poured the pancake soaps I realized that they look like chocolate milk rounds. Doh!

At least the pats of butter turned out fairly well with a mixture of different glycerin bases, although after I poured the first three I realized that I was pouring them waaaay too thick. *embarrassed laugh* At least they look soft and creamy. Here’s the first picture featuring the butter soaps. I’ll probably remelt the thick ones and pour them thinner. I should note that all of the components are scented with the Brown Sugar FO, which smells just like a rich maple syrup. Yum!!

Two of the pancakes are about the right thickness, despite the color issues.

Finally I’ve decided that I should do two for a short stack instead of 3, which looked way too clunky. All that’s left is to “glue” the stacks and butter to one another with a bit of soap, and then I will drizzle a rich brown syrup soap down the stack (well, hopefully I can manage that color, but I’m open to using my imagination *grin*). 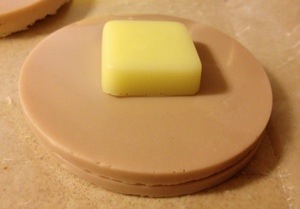 While I’ve been working on a proof on concept pancake soap I also ended up with a refreshed search for the worm mold for Worms in Dirt. A very clever friend brought up the idea of searching the toy department and also found some creepy crawly creature chocolate molds. These searches triggered new related search links that I haven’t had before and suddenly I heard the choir sing. Hallelujah! *impish grin* I feel so stupid admitting this, but despite what an imbecile I seem like for not thinking of this in all of this time, I am tickled to have found gummy worm molds. *quick happy dance* They can withstand high heat, have the perfect shapes and characteristics, and I don’t have to pour them individually like I would with lure molds. Even better I don’t have to learn yet how to create my own silicone mold like I was debating. Booyah!! 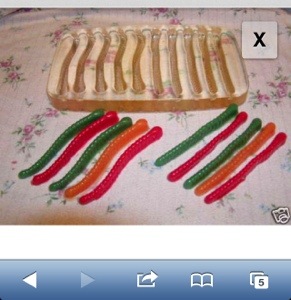 I’ll pour the syrup for the pancakes tomorrow hopefully and then get to testing it. I’m curious to see if I can get a more complicated soap to stay together once it gets wet. *crossing fingers* In the meantime is anyone ready to brave the storm and go to IHOP with me? My kitchen smells so yummy and now I’m craving real make-my-butt-five-times-bigger pancakes.

I had a tiny bath and body business which focused on pampering. Since the business had to close due to health reasons, I write post about a variety of topics, ranging from Invisible Diseases and being a Spoonie, to fun and DIY things.
View all posts by Georgia's Pampering »
← Pancakes and Boulders
Silver Linings →