I thought I’d share this super helpful tip I learned recently. I’ve been trying once a week to do the prep for several meals and have been trying to even do the whole homemade freezer meals thing.  I’ve been using bell peppers a bit more than usual due to the meal preps (and because I’m suddenly not intolerant of them like I was, although I so far can only eat green ones). The worst part was that several of the peppers would go bad before the coordinating meals were fixed. I decided to see if it’s possible to freeze them and found tons of variations, so I’m not including any links this time. There are just so many versions and I have no idea who actually figured it out, so I don’t know who to credit. I’m very thankful to everyone else that knew how to freeze bell peppers though! Now I can just pull out the portion I need from the bag and fry them for a few minutes with meat for quick fajitas.

Basically you just prep your peppers, cut in the way you want, flash freeze them, and then you can bag them. There are some handy details I put together from all of the versions, though. First, make sure to dry your peppers after you wash them, before you cut them. You don’t want extra water during the flash freezing. Second (and this I actually learned from Top Chef), you can trim from a pepper in four to five cuts. The key is to start at the top and curve your knife to follow the flesh as you cut down, until you cut through the bottom. Third, try to keep the peppers from touching much, especially if you end up dicing them. That flash freeze will freeze them in clumps and it won’t be so easy to just grab a few. Last, this doesn’t work for raw usage. Once frozen the bell peppers must be cooked. They will be nasty once they thaw if they’re not cooked, so don’t try it.  Bonus tip (although I’m still on the fence on this one): supposedly the bell peppers with three points on the bottom instead of four (or more) are sweeter and have a little less acid.

Instructions are basic, but at least I can provide pictures so that you know you’re doing it right. I started off by washing and drying the bell peppers, and then cut them off of the core as described.

Next I sliced mine into thin strips, since I knew that cut would work for my household. They are just the way we like them for fajitas and easy to dice if I want to add into some rice or something. 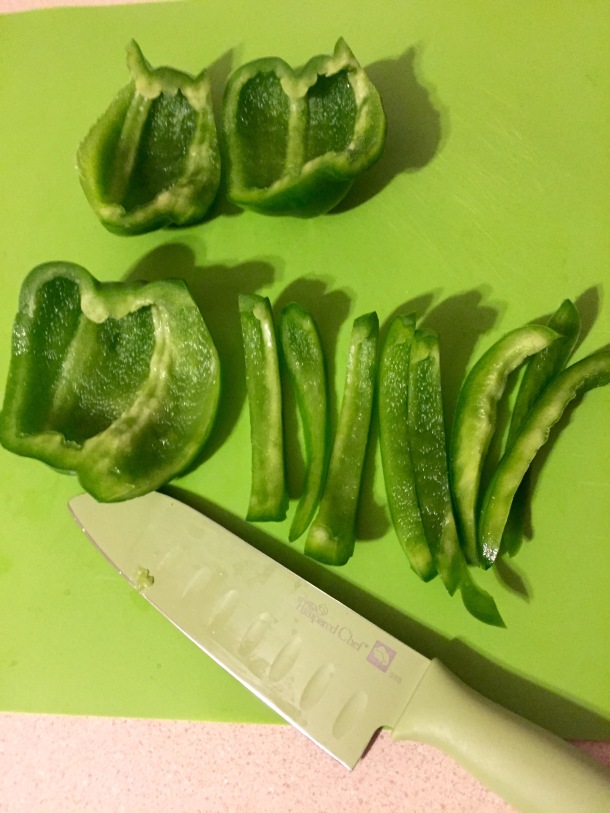 Cover a cookie sheet with wax paper and lay the sliced/diced peppers out on the paper, touching as little as possible. (This cut is more forgiving, so if they touch it’s not as big of a deal thankfully.)

If needed you can put another sheet of wax paper right on top of those peppers and repeat the process. Keep in mind that it’ll take a lot longer to flash freeze like this. It’s recommended that if you have the room, then lay everything out in a single level for quick and even flash freezing. I don’t have much space to dedicate to whole sheets all laying flat, especially with all of the freezer items I now have, so I had to try stacking. It works for us, but it definitely does take longer, so if you have room, stick to a single layer.

I have no real clue how long it takes to flash freeze. I’ve done this in single layers all the way up to three stacks deep and still haven’t really figured out the right time frame. My recommendation is that if you have the space and don’t mind a little bell pepper aroma for a day, make it easy and then just freeze them (exposed) overnight.  Check on them and see if they are frozen through. If you have stacked them, you’ll probably package the stacks at different times, since the bottom ones will need some exposure to flash freeze. Here they are frozen. If you look closely you can see the little frost where the flesh was moist. 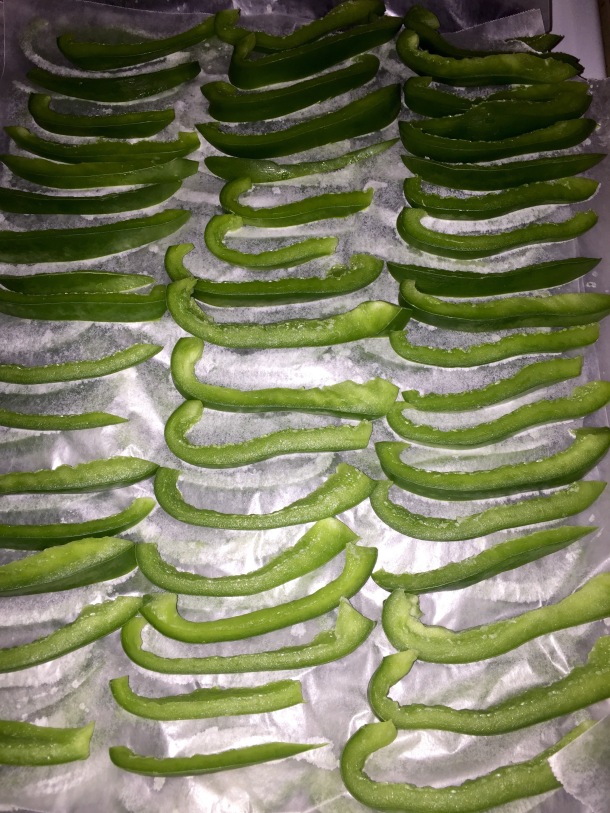 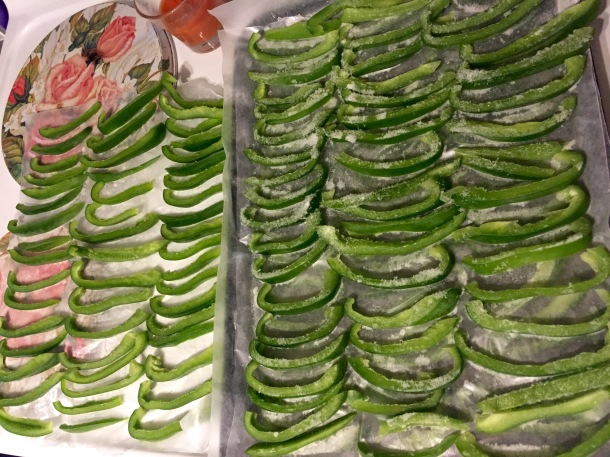 Peel them off of the wax paper (they’ll have a little cling) and put them in a freezer zipper bag. I did a whole bag of bell peppers from Sam’s Club, at a super great price, and ended up with three layers. They all fit in a gallon zip bag and I put a pop can beside it so you can see how much frozen bell pepper I have on hand now.

﻿When I make fajitas tomorrow all I’ll have to do is pull out a handful and warm them in a skillet with the cooked, sliced meat for just a few minutes. Easy as can be and no need to cook all of your bell pepper dishes one after the other so that your peppers don’t go bad. *big grin* It’s such a small thing, but it has been a huge help!

If you have any questions, please don’t hesitate to ask, and I’d love to hear about your way if you all ready are a pro at this. 🙂 I’m hoping to discover more tips for meal prep as I get better at the freezer meals.

I had a tiny bath and body business which focused on pampering. Since the business had to close due to health reasons, I write post about a variety of topics, ranging from Invisible Diseases and being a Spoonie, to fun and DIY things.
View all posts by Georgia's Pampering »
← Happy News!
Super Easy Roasted/Baked Chicken →