If you’ve been following my blog for the last few months, then you know I’m on a frozen meal prep kick and learning how to come up with energy saving ingredients that allow me to still cook a meal on my bad health days. One ingredient I had trouble with for months was basic diced chicken (in bulk). My crock pot chicken always came out tender, but always shredded instead of holding up to being diced, and I really wanted some diced chicken that I could freeze into portions that didn’t cost an outrageous amount (really grocery stores?!  That has to be a massive profit margin!). I tried a lot of variations until I finally came across a post via Pinterest that explained how to get flavorful roasted chicken without being super intimidating. The original post is at Roasted Chicken Breasts and I urge you to read through it if you haven’t mastered chicken yet.

I followed the instructions on the site, although I used Daddy Hinkle’s dry marinade since I have a lot of that on hand (we get a combo pack with the original liquid marinade since that’s the only way it’s available around here and go through the liquid WAY faster lol). I bought a big package of chicken “tenderloins” for a great price at Sam’s Club and it took three batches to cook them all. Oddly enough I had to cook the tenderloins just a bit longer than the breasts in the instructions, but it gave me a time frame to start checking with my meat thermometer.  They came out mouthwateringly gorgeous. 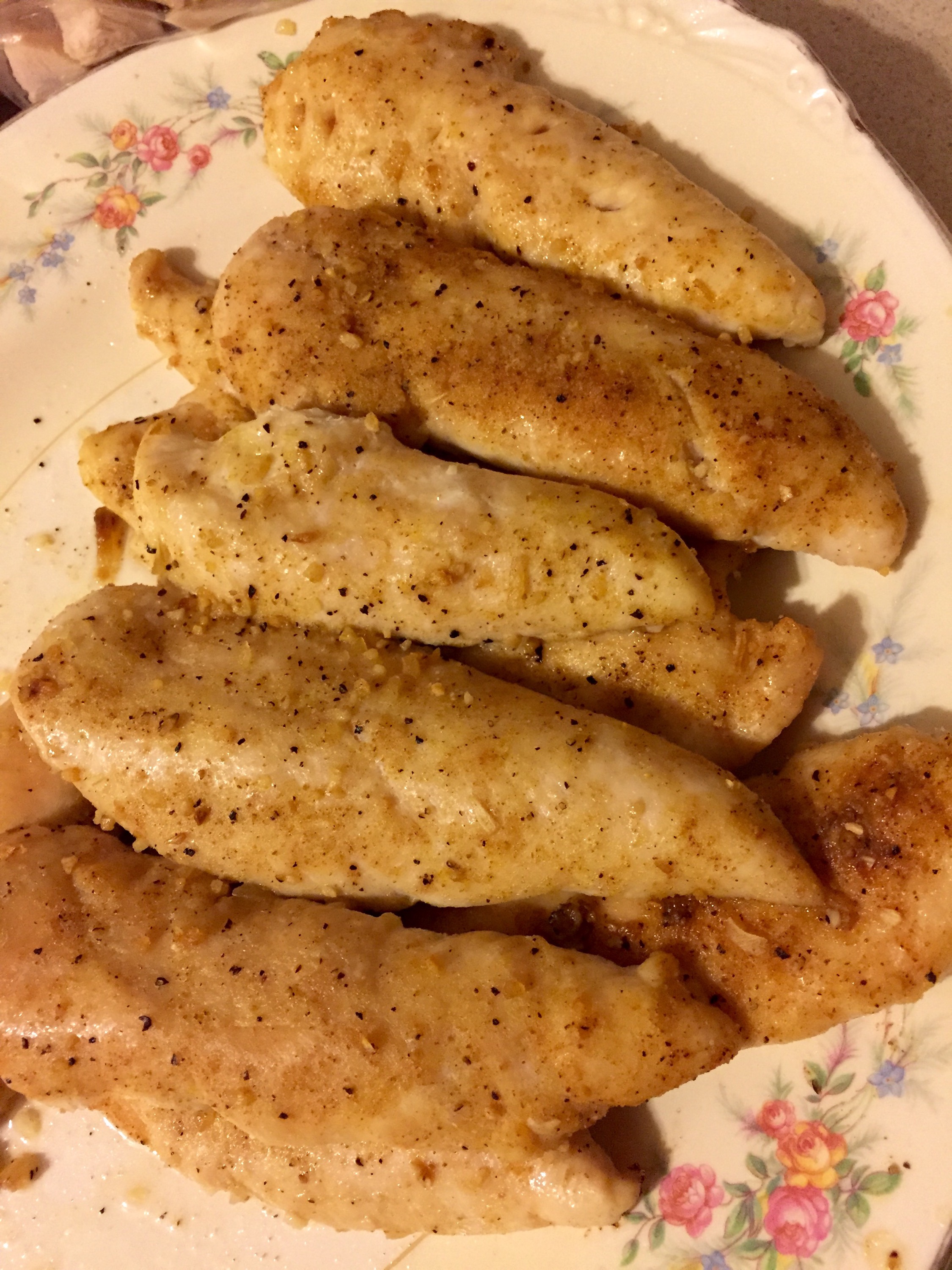 While each batch cooked I cooled the previous batch and then diced them up, after I performed some quality control checks. It took eating three before I actually declared this a success.  You know, you can’t rush quality control.  We all have to fall on our sword sometimes. *grin*

Anyway, one bulk package from Sam’s took about an hour and a half with prep, baking, and cutting, and filled three freezer zip bags, as well as a bag of some solid tenders for lunches in the refrigerator.

These have been SO handy too!  I thawed a bag and used half of them in the Frito Supreme dish I previously blogged here.  I was able to just warm the pieces up with the wet ingredients and the meal was ready for plating within ten minutes!

I never realized until I read the roasting instructions that I had mostly been over cooking the chicken, which was why I couldn’t get that store bought tenderness when I tried baking. I always use my thermometer, but I was testing WAY too late. Doh!  She made a great point about needing to season the chicken, too. I’ve always seasoned the dishes themselves, but it never dawned on me to use the Hinkle’s directly on the chicken in this capacity until I read that post (for shredded crock pot I just do a few bouillon cubes and water, plus a little poultry seasoning, usually).  I love that I can use whatever I can tolerate at the moment, too, since I can’t always tolerate the same spices!  Bonus: the sliced pieces have been flavorful enough as is to make a healthy topping for Larry’s salad “lunch” at work (what do you call meal break when it’s in the evening, yet not dinner, anyway?). I had never baked meat on parchment paper either and I think that was much better than the usual foil versions I had tried before. It also seems a lot healthier with a better texture, to us at least.

I really wanted to share this information since there are so many other variations out there and this is the first that truly worked for me. This helped us save quite a bit of money, keeps cooked chicken on hand for quick meals, and was so easy that I was able to do it on one of my not-so-good days. A few days later I cooked up a huge package of lean ground beef, unseasoned, that I throughly drained, broke up into pretty small pieces, and froze, too.  Having precooked proteins on hand has made cooking during my worst point of the day a lot less daunting, not to mention a lot more cost effective, since I can get some great bulk prices. *happy dance* I can’t just pop on down to the market when I decide to cook, so having things on hand is essential, but can get expensive when you buy them in handy packages at the store. I’m absolutely tickled!

Are you interested in hearing about other hacks that I try?  Do you have any other meal “hacks” that have made things easier for you that you wouldn’t mind sharing?  My next hack attempt is going to be freezing blueberries. I’ll be able to have them for smoothies even when it’s hard to get good ones at a decent price out in The Midwest. I just love life hacks! 🙂

I had a tiny bath and body business which focused on pampering. Since the business had to close due to health reasons, I write post about a variety of topics, ranging from Invisible Diseases and being a Spoonie, to fun and DIY things.
View all posts by Georgia's Pampering »
← Freezing Bell Peppers
Soap, Brains, and Automobiles →