When I was in elementary school we would get to play the original Oregon Trail on massive computers and it was the highlight of the week. I got to sit down, pick the supplies and such, and send my little pixel family down the Trail. And they died. They always died. Every so often the livestock would drown while crossing a river, so my little wagon train would too. Sometimes they were hungrier than usual and died of starvation. 9 times out of 10 they’d die from dysentery. Of course I was a smaller version of the nerd that I currently am and had to learn what in the world my little pixels kept dying from. Ew. They died from uncontrollable diarrhea. Seriously?!

Fast forward through my life and whenever I feel like Murphy’s Law is being exceptionally cruel I say “you died of dysentery”. I had to stop watching documentaries about the actual Oregon Trail because my mind automatically went there. So I’d be the crazy person trying to muffle my laughter because every time they talked about the hardships I’d always wonder how many died of diarrhea.

I’ve worked in the medical field, and had to learn a whole lot more to be an advocate for my medical care as someone with a chronic illness must be, and know how life threatening GI issues were and can be. However there’s still a ten year old inside of me that points at the people in the pictures that does the whole Oprah “and you get a car” type of pointing, substituted with “and you got dysentery! And you got dysentery!”. Yeah, I all ready know I often have a morbid sense of humor.

I’ve actually talked about it so much that L had to share a picture with me that he found online. I get this random text from him and it quickly became my phone wallpaper. 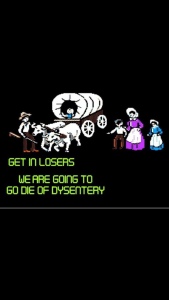 This has become my favorite way of beginning or ending text conversations and the ten year old in me grins like the Cheshire Cat. Have fun trying to get this out of your head now. *laugh* It’s especially fun to mentally do the Oprah point when you’re around a crowd of annoying people, like a school function or the doctor’s office when the doctor is running behind. I can guarantee that it really helps if you get anxious around crowds. When, in your mind’s eye, you see half the people holding the seat of their pants after basically getting the worst dose of colon blow ever, it can actually be difficult to not be cheerful.

Hey, dysentery happens, so sometimes you just have to go with the flow. Yep, I felt obliged to go there. Hopefully the new version of the game sells Pepto Bismol.

This post was approved by the juvenile sense of humor hanging out in the back of your mind. 😉