Hi there!  I have been coping with some emotional and medical issues, and honestly tend to become even more introverted when dealing with things, so I tend to opt for things that distract me, and blogging makes me WAY too reflective to be considered a distraction.  *grin* I’m doing a little better today, so I wanted to take this opportunity to write.  J  In light of everything I thought I’d keep things light today and wanted to share some of my favorite things.  I don’t believe I’ve ever done that, other than recipes, so prepare yourself for an eclectic collection of items. I added the links to Amazon for what items that I could, in case you’d like to check them out, so just click the hyperlink and it should give you a new window with Amazon instead of steering you away from the post.  (I divided this into two posts with home and organizing being first and next with be electronics and entertainment.)

First up, I’m absolutely obsessed with all things Command related.  Hooks, bins, and picture frame strips; you name it, I have them all!  *grin* I especially love the cord hooks, wire hooks, and the all-purpose 3 lb. hooks.  I have a hanging shoe organizer on a door with all of my extra cords, label maker, candle melts, and other knickknacks, but dedicated an entire row to command products so that I always have a variety on hand when I spontaneously decide to organize things. I even have one of the bins on the wall beside the couch holding both of my e-readers in easy reach, yet safe from the animals, and still able to charge.  I’m tickled by the simplest things sometimes.  *laugh*

Second, although there are a few features that are definitely missed, I love the performance of my Shark Navigator Deluxe Vacuum.  It auto adjusts to carpet pile, which is my favorite feature, and picks up kitty litter really well, which is actually very rare.  I wish it had a light, a spot for all of the tools to attach, and an edger, but it’s a powerful workhorse at just $123.99.  It is super light and moves so easily, which means I can vacuum without causing myself more pain.  (Seriously, it is so effortless that people will keep vacuuming when I have them test it out, instead of doing just a push or two!)  Despite missing a few features that I like, I honestly wouldn’t trade this for a different brand. 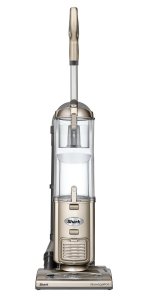 My absolute favorite kitchen gadget, which I have even given as gifts because I love it so much, is the simplest piece of plastic that is seriously handy.  The Jokari Baggy Rack Storage Bag Opener and Holder quite simply has clips that hold your zip bag open so both hands are free for filling the bag.  I know that you’re probably thinking I am the laziest person in the world to need and love this little device, but think of how many times a zip bag has folded in on itself as you tried to put leftovers or some meat in?  Or what about when you try to pour something with some sauce on it?  Or had it fold as you were trying to spoon corn into the bag with one hand and holding your pot in the other, and those evil little kernels of deliciousness found their way under the edge of the cabinet, under your mixer, or made a wet path across the counter?  I especially love it for when I’m doing meat prep, like chicken strips, and then I can even pour marinade in without worry (my wild, unexpected movements cause enough messes, so I need every bit of help available *laugh*).  The holder works really well when pouring bagged ingredients in, too, like making your own trail mix.  At $6.78 for a single unit and $10 for two, it’s a very cost effective gift that will be priceless for the recipient for years to come. 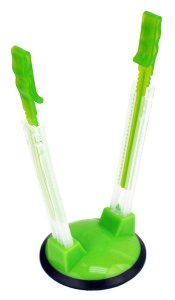 We bought a gas meat smoker and have been learning different techniques, etc., which brought on our first attempt to spatchcock poultry.  Prior to this we always bought broke down birds and we figured I should use what little energy I have on other tasks instead of trying to break down whole birds.  No shortcuts are allowed when smoking a whole turkey, though, so we did our research and bought the OXO Good Grips Spring-Loaded Poultry Shears (at an investment of $24.95).  According to the “Man of the Smoker” (yep, that’s my nickname for him when he messes with the smoker) it’s pretty easy to spatchcock a thawed turkey with these shears, although it would be a little more difficult for someone with less hand strength (like me).  They work so well in most food prep, though!  They cut chicken into pieces easy enough that I prep a lot more chicken than ever before, they make short prep work when used on vegetables such as broccoli, and can even cut hunks of clingy fat that some of my knives have trouble with.  The best part (for the one that has to do the dishes *laugh*) is that they come apart and are a breeze to completely clean.

Another often used kitchen gadget is my professional SaladShooter.  I bought this through Walmart’s website years ago, so I have no idea what I paid back then, but I found one that looks almost identical to my unit and attachments here for $44.66.  We mainly use it for cheeses, since we’re kind of obsessed with cheese and it’s a lot cheaper to buy a block at Sam’s Club.  We had a lot of problems with packaged shredded cheese molding quickly too, especially during our humid, hot summers, but only shredding a few cups at a time when we want it on hand, and covering up the rest of the block until the next time, has massively cut down on waste.  To top it all off it is running perfectly over 5 years later!  If you buy one, make sure to keep an old toothbrush (dedicated to this task) with your kitchen washing items, since that’s the most effective way to get the cheese grime off of the grids and out of the grater holes. 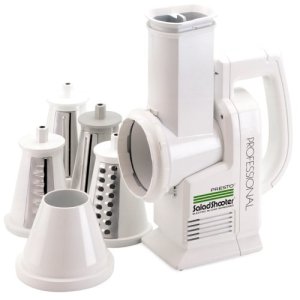 Lastly, I thought I’d throw in one of my favorite desserts.  The best part is that it’s a diet ice cream that tastes and feels just like the real deal in our opinion.  Edy’s Slow Churned Ice Cream has several flavors with that awesome slow churned texture, yet they have half the fat and a third of the calories of regular ice cream (depending on what you eat, of course).  I actually prefer this ice cream over regular ice cream, now!  It can sometimes be difficult to find some of the flavors in the Midwest, but even plain ole vanilla floats my boat.  *grin*  I am a big sucker for the Mint Chocolate Chip though and it helps cool down my GERD, too, so I almost always have a legitimate excuse to eat ice cream whenever I’m wanting it without anyone making me feel like I’m just being a pig.  *biiiiig grin* Yeah, I’m shameless sometimes.

Tune in tomorrow for the other half, when I totally get my nerd flag flying.  Until then, happy pampering!

I had a tiny bath and body business which focused on pampering. Since the business had to close due to health reasons, I write post about a variety of topics, ranging from Invisible Diseases and being a Spoonie, to fun and DIY things.
View all posts by Georgia's Pampering »
← Cyber Monday
My Favorite Things, Part 2 →