I took up boxing shortly after I moved back home following my escape from an abusive relationship. I’m one of those people who handles things by finding ways to be in control of at least part of whatever is wrong. I hated feeling vulnerable, watching over my shoulder, and wondering if the next time he found me would he finish the job (he did a bit of stalking after I escaped, so it has been a legitimate fear for years)? So I found emotional strength and control by making myself physically stronger and prepared. Although I thankfully haven’t caught sight of him wherever I’ve gone or been for around ten years now, I still find inner peace with boxing.

My canvas punching bag accidentally got wet and basically turned into cement, so I gave boxing up for several years. Two years ago my husband bought a strike shield, but was unavailable to hold it when I got the urge to box, so we hung it on our bedroom door. When I closed the door it would hold the pad in place. However…it sounded like I was breaking the door! Needless to say, I went back to Wii boxing, but the satisfaction just isn’t there when there’s no impact. *laugh*

As an early joint Christmas gift we bought one of the BOB stands (Body Opponent Bag), which was a display and a price match, so we got three discounts on it, making it one of the most guiltless workout pieces we have ever bought. *grin* Until we get our spare room situated he hangs out in our living room. I’m going to put some “ink” on him once I make up my mind on what scars and tattoos I want in him, but in the meantime we made him into white thrash. I named him Eddie (there are just too many impolite things BOB can stand for, so I couldn’t do it lol). The name is a play on part of my ex’s name, but we don’t have to actually soil our home or conversation with his real name. I really wouldn’t want to say the bastard’s name all of the time, honestly, and especially not have my husband say the name often (excuse my language). The name comes up enough when we work through my trauma, so I decided a play on it would help. And it makes boxing doubly satisfying and therapeutic. 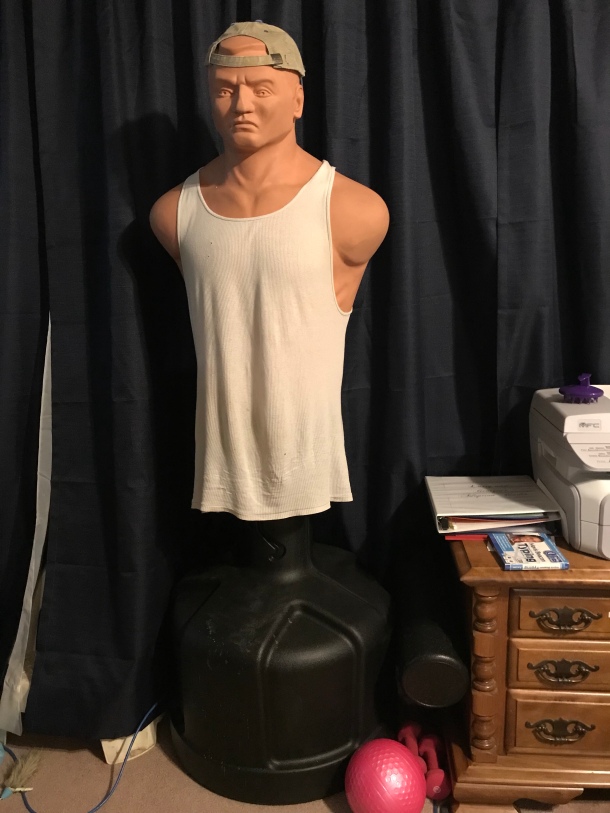 L poured 350 pounds of sand into the base to keep it in place, which is the max. Recently we discovered that if I’m upset about anything I am actually able to hit hard enough that I moved Eddie all the way until the base was stopped by the wall. Needless to say I was impressed! I truly didn’t think I had that in me. The flattened ring pattern on the carpet from where the base used to sit is like a badge of honor, so I haven’t tried to lift the pile there yet. *laugh*

If you’re like me and need some physical release, but can’t do much exercising, and especially if you’re dealing with the lifelong effects of abuse, try out boxing. It’s great for helping you get into working out, you totally lose the dreaded “droopy chicken wings” on the underside of the arms, and it may just help you become a little more emotionally fit, as well. After lots of broken and bleeding knuckles, I caution you against ever using tapes or training gloves on canvas bags or BOBs. I just wanted to throw that out there in case you’re interested in picking this up. It’s worth spending more for the pro gloves, trust me! If you would like more information or tips, don’t hesitate to contact me. I’m totally not professionally trained, but I love it and have learned a lot along the way, so I’d be happy to share what I’ve learned.

So this is one of the Habits I established for myself for this year (see my resolutions post for an explanation if you’re lost). It’s a three-win for me. Have you started or plan to start a new habit for the year? If you need someone to encourage you while you make it into a habit, I’m happy to help! After boxing, don’t forget to do a little pampering, of course! 😉