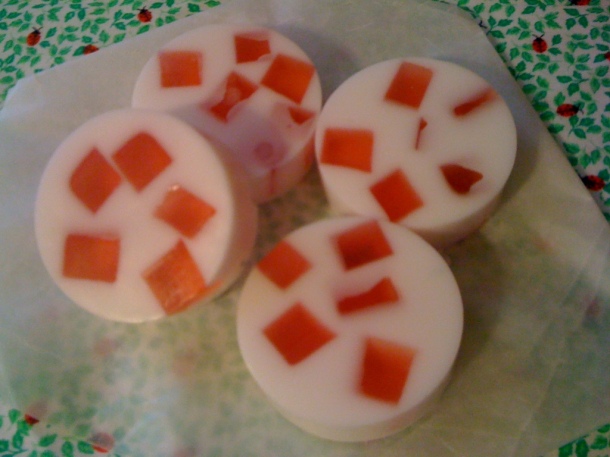 Here are the adorable embedded soaps that I had written about. Bubblegum on the outside while the jewel-tone squares are watermelon. I’ve been pondering a name, but all I’ve decided so far is that it needs “surprise” in it for the watermelon. I’ve packaged them up and figured up the prices. Usually I procrastinate on those parts, so it’s a sign of just how excited I am about these simple soaps. *grin* I haven’t been brave enough to sniff the lotions…I might let them cure another day lol (does best cowardly lion impersonation)

Posted in Uncategorized. Bookmark the permalink.

I absolutely love the watermelon sorbet cars that I made. I decided to work on a boys combo to go in the little outdoors kid’s meal boxes that I found (I used the side of one for the picture). These cars will definitely be included. Hopefully dinosaurs turn out this well too *grin*

Posted in Uncategorized. Bookmark the permalink.

Now that the thunder storm is completely done and it’s safe to bring up all of my electronic gadgets I decided to write a quick post.  I spent a while during my technology free time (cue groan or even dramatic gasp since I’m seldom far from at least two gadgets) working on new products.  I jumped right in to my most exciting project – the cocktail combos.  While my base was warming so that I could incorporate the emulsifying wax I worked on some embedded soaps which I’ll discuss in a few, since that’s a lot more cheerful. *grin*  Anyway, the first round of lotion samplers that I made went pretty well.  It’s kind of hard to mess up lime margarita scented lotion honestly.  Lol.  I moved onto the Island Margarita samples and was very disappointed.  First I must admit that I seriously dislike peach and mango.  As I started blending the FO into the lotion I instantly developed a massive headache and started feeling sick to my stomach (See!  Every cell in my body hates those scents, especially peach.).  I decided that I needed to mellow it a little so that I could tolerate making these if anyone ended up liking these and added some of the lime to it, which actually did help, but the scents lingered in my nose.  After I finished I moved on to creating a pina colada blend and things really went downhill then.  Oh man!  I think that the candy-sweet pineapple and super mellow coconut FOs are the wrong varieties for this, but I really didn’t want to waste all of this.  The mad scientist started rummaging through my flats of FOs, pondering scent profiles if I added this or that.  Finally I added a tiny bit of Jumpin’ Jellybean FO and a healthy dose of Buttercream FO, and it finally became decent enough to leave be to cure and check in a few days.  The vanilla really helped to mellow the funkiness from the odd scent created by the two FO variations, but I still swore that I smelled peach (bleh!).  I have no idea how I could get peach from pina colada, but thankfully the quick thinking and touch of jellybean boosted the fruitiness without the odd sweetness that the pineapple has.  At this point I was so discouraged, but really wanted to finish and started the mojito lotion.  I swear that when I originally smelled and described the mojito FO that it was crisp with citrus and mint notes.  I swear that somehow I started smelling more of that wretched peach this time though!  Thankfully my grandpa flashed through my mind and I dug out Wintergreen EO to add, which worked perfectly.  (Grandpa often had wintergreen chew and it’s quite a comforting childhood scent for me despite how disgusting chew is to me.)  Anyway, I was so happy to be done working on the cocktail varieties since I was so disappointed.  I’m hoping that the scents will be better after they cure (and I will smell the rest before going near the Island ones! Lol).

Next I moved on to some fun soaps.  I made some amazing watermelon scented, strawberry colored, soap squares a few days back and diced them up to embed into other soaps for some creative soaps that children might really like.  I admit to being puzzled for awhile over what the complementary main scent should be and decided that the smartest course was to ask my young helper.  We agreed that bubblegum would be neat, since the little bursts of watermelon while using and exposing the embeds would remind people of watermelon bubble yum.  *smile*  I dropped in six little cubes of watermelon and then poured slightly cooled bubblegum scented white soap.  I figure that the white main soap will make the jewel tone pink cubes really pop when they are seen.  I also made sure to adjust the little cubes to poke out and make odd non-patterns to make them even more interesting.  I am beyond excited to take some pics and post on here once they set and I can unmold. *happy dance*  I really think that these are some fun soaps and hope that they get a lot of attention at events.

Although I feel that the main goal of tonight’s work didn’t go well, I’m happy that my creative and random soap project has given me something new to be excited about.  I’ll keep you updated on the cocktail situation (I can always omit one type from the combos I suppose) and hope that you don’t mind crossing your fingers that they turn into winners after setting up.  *grin* Sweet dreams and I hope that your catch up day from the holiday goes well if you have to go to work. 🙂