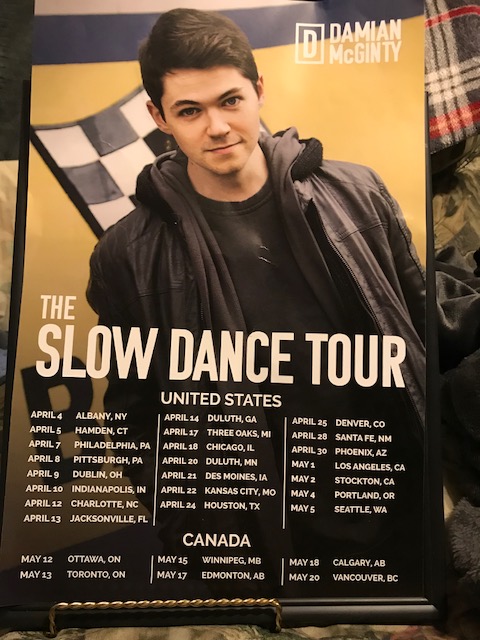 Confession time…I’m obsessed with Celtic Thunder™ and Damian McGinty.  I have all of their songs, literally, and even a few concert DVDs.  *grin* I’m a fan of most Celtic things, since I embrace and enjoy that part of my ancestral heritage.  This goes all the way into fangirling though, regardless of age.  He’s kind of like Sean Connery – he’s so cute no matter how old you are.  *laugh*

If you’re not familiar with Damian, here is his background via his website: “Singer/songwriter/actor Damian McGinty was born in Derry, Northern Ireland. His career began at the age of 13 when he recorded a charity CD, and his unmistakable talent and charisma quickly catapulted him into fame and success. Selected in 2007 by producer Sharon Browne and musical director Phil Coulter to join the inaugural cast of Celtic Thunder, Damian quickly became a fan favorite for his friendly charm and his deep baritone voice. Following his own advice to “Dream Big,” Damian took his career to the next level by auditioning for the Oxygen network’s The Glee Project in 2011. Out of 40,000 auditioners, Damian was chosen to appear on the show with only eleven other hopefuls. Extreme dedication and an intense work ethic took him to the final four, and ultimately he was chosen as one of two winners. As a winner of the project, Damian landed a guest star role in Fox’s hit television series Glee, as foreign exchange student Rory Flanagan. Initially slated to appear in just seven episodes, Damian was so popular his role was extended to finish out the rest of season three.”

Although I had lost interest in the show I came back to it when I caught his audition and stayed while he was on the show.  He mentioned during the audition show about being in Celtic Thunder™ (CT) and me being me I immediately hit YouTube.  After he was no longer on the show he showed back up on YT as a guest singer with CT and after many hours of playing the concerts (and playing so many times that even L learned some of the lyrics *laugh*), I shared the videos with my mom.

I started showing some of the YouTube concert videos to my mom (and L suffered through many hours of it as well LOL).  I got her hooked on the band and we had a “once in a lifetime” chance to go to their Legacy Volume Two™ tour concert; the first Kansas concert in 5 years, in October of 2016.  While buying merchandise during the intermission we found out that Damian had released his first solo full album, This Christmas Time©, just over a week prior to the concert.  I bought and downloaded the concert while waiting in line.  Yep, I’m that into CT.  *grin* It was an incredible concert and when we found out that Damian would be doing a small solo tour near Christmas, I bought those tickets immediately.  (Damian is the middle kilted man.)

The Christmas concert was absolutely magical!  It was in a Kansas City Public Broadcast studio with probably 40 people.  There were a few original songs, plus the nostalgic traditional Christmas songs.  The producers apparently weren’t sure how well his first tour would go and priced it so affordably that nearly every person had a meet & greet ticket.  The poor guy had been delayed by a storm, had to take a night flight after the concert to get to the next location before another snowstorm hit, so the meet & greet was a bit abbreviated.  Mom and I were last in line and when he asked my name to autograph my ticket he actually sang a bit of a song with my name in it.  I totally fangirled and there’s an extremely cheesy grin on my face when we had our picture taken with him.  I got picked on for my name for years, so it took me by complete surprise to here my name sound beautiful when said with an Irish accent.  See, I’m still fangirling.  *laugh*

We figured that was an amazing year of momentous opportunities, but then I learned about his new tour starting in 2018.  Mom got a copy of her ticket in her Christmas stocking.  (Christmas stockings have no age limit in my family.)  We had bought four tickets, hoping that we would be able to take Kiddo to the concert, but yet again I had jumped the gun on hoping to have Kiddo in time.  Anyway, on Sunday, the 22nd, L, my mom, and I got to see Damian in concert up in Kansas City, MO.  He is currently on a solo tour to promote his EP of No More Time™; his first EP of his own original songs (which I had on pre-order for a month and had some songs memorized in the couple of weeks between the release and his concert *grin*).  His song Unbelievable © is a nod to country music and is the most smile inducing ear worm I’ve ever heard. 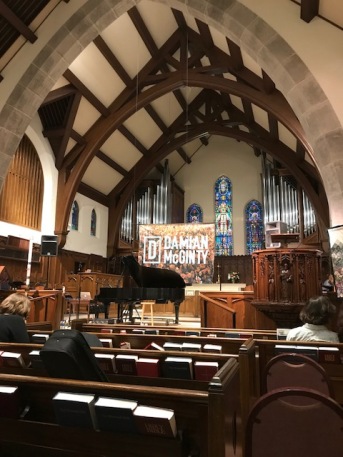 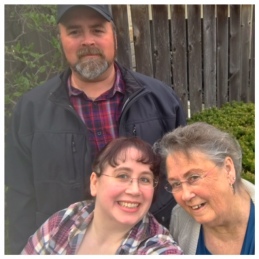 I couldn’t resist taking pictures of the church (I’m not going to bore you with a complete panorama of it lol).  While waiting outside I made them take a selfie with me, to put in this year’s scrapbook; you can tell L is so happy to have his picture taken *grin*.  While waiting inside I had to take a picture of the set up, since it would be my only chance to get a picture of his performance.  The ticket said no photography or videography allowed and we all know how hard it is for me to color outside of the lines.  The church’s choir came in and opened for him with a variety of songs from famous musicals.  When Damian came onto the stage afterward I was pretty sure we were all going to be deaf between the cheering, clapping, and echoing of all of the noises.

He did a few fan favorites (I was absolutely tickled that he covered Galway Girl © by Ed Sheeran, although Sheeran’s is a new take on the classic by the same name), then he did a musical version of a timeline that led up to his new, original songs.  He sang some Oldies, which got a lot of people dancing and clapping.  By the time the last few songs were sung I had L take some pictures for me (it sucks to be fun sized when people stand in front of me *laugh*).  I had noticed some people recording or taking pictures throughout the whole concert, so I broke the rules.

It was such an awesome concert and my cheeks hurt from cheesy grinning for so long.  *laugh* Toward the end he announced that he was in a movie that will air this winter and that he will have a full album next year, so he will be back to KC during that tour.  *happy dance* I may have gone hoarse from cheering so loud after hearing that he is coming back.  Maybe I’ll get to share the new concert with Kiddo.  *crossing fingers*  And to top it all off, Mom and I have tickets to CT’s concert in October!

So if you’re interested in checking CT or Damian out, I embedded links for you, so you can listen to samples or purchase if you enjoy them too.  I definitely recommend watching the videos for Seven Drunken Nights, Young Love, Breaking Up Is Hard to Do, and A Place in the Choir (all copyrighted by Celtic Thunder).  If you’re an Amazon Prime Music Member almost all of their music is on prime streaming, too!  Now pardon me as I go watch Galway again…

Everything Chicken Recipe by Leah

If I was choosing recipes to share with you based on frequency of use this chicken would have been one of the first.  I make it all the time.  Most often I use it for lunchtime salads with lettuce, shredded cheddar cheese, sunflower seeds, tomatoes, and ranch dressing.  I serve it as is with some tasty sides like mashed potatoes; I use it in tacos, wraps, quesadillas, pastas, and more!  It is almost always in my fridge.  This chicken is basically my go to and it’s so simple it’s embarrassing.

We call it Everything Chicken because we put it on…EVERYTHING!  I know, I know.  It’s not that creative but it was named by accident when my husband was asking where the chicken was as he dug through the fridge.  I asked what chicken he was talking about and his response was “You know. That chicken we put on everything.”  Thus the name was born.