I’ve researched A LOT about bonding ideas for teenage adoptions.  Several articles mentioned trying new foods together and I kept thinking about what I could plan without knowing what Kiddo has all ready had.  We don’t really have very exotic palettes, so I figured I’d need to think outside the box most likely.

Thankfully I’m a big fan of Good Mythical Morning (Mythical Beasts shout out!) and Facts., both shows on YouTube.  They both feature a lot of daring taste tests and I’ve learned about some interesting foods that we don’t normally see in Kansas.  During an episode of GMM right before Valentine’s they did a spicy taste test/rating scale.  Two products rated pretty high on the spicy scale, The World’s Hottest Chocolate Bar and the Toe of Satan. 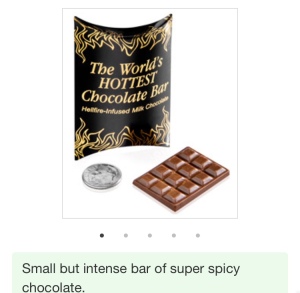 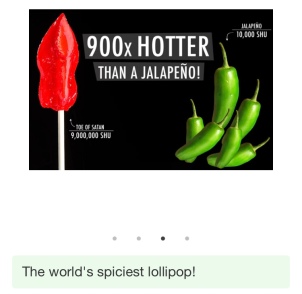 While watching the episode I kept thinking about how L had found a bottle of super spicy hot sauce on our honeymoon and he didn’t get it, and of course they didn’t have it when we made it back to that store a few years later.  I thought that the spiciest foods Rhett and Link ever had might be a fun replacement and a very unique Valentine’s gift for L.  After some searching I finally found them on the Vat19 website.  That chocolate bar there is meant to be eaten by one of those tiny squares at a time, if that much!  They were sold out at the time, probably because there are a lot of Mythical Beasts out there, but they had the Toe of Satan (the lollipop in the right picture) and a bag of Ghost Pepper Hard Candies.  (Note: it turns out he just wanted the bottle of hot sauce as a conversational piece, not because he wanted to try something excessively spicy.  He got to torture his coworkers with them, though, so they were still a successful gift.  *laugh*)

I couldn’t resist looking around on their site since there were all sorts of fun categories to check out like gummy, gadgets, thinking putty, and crazy candy/foods.  I saw Mberry tablets and got so excited, because I had seen them tested on both shows and never knew where to get them.  These tablets are made from the berries of the Miracle Fruit Plant (Synsepalum dulcificum) and make acidic and sour foods taste sweet.  As I added them to the cart it dawned on me that these would make an awesome bonding taste test.  Lemons, limes, kiwi, sour cream, mustard, and even pickles would be a super affordable and fun taste test without being too extreme.  This tablet transforms foods and adults have gone nuts over how different foods taste, so I figure it’ll be mind-blowing, “gotta tweet this”, kind of fun for a teen.  *grin*  Shoot, I’ll probably feel that way too!

As I looked around I saw a few other items that will be even more daring without being spicy (I don’t want to give a bunch of teens ulcers or something *grin*).  The scorpion lollipops were a no-go; I’ve been terrified of scorpions most of my life and have to turn away even if they’re dead.  No.  Just no.  Then I saw one that most likely made me laugh like a villain.

Yep, Bacon & Cheese flavored crickets.  Now THAT should be pretty daring!  I know from watching GMM that crickets taste a lot better when there’s a little flavor added to them, otherwise they taste kind of stale nut-ish.  Here’s the ultimate test to see if bacon truly does make everything better.  *laugh*

Bacon jam spread and astronaut ice cream will probably make an appearance as well.  Go big or go home, I figure.  The taste testing adventure should give the teens something to talk about later, at least!

While on there I took a little side trip and found my own Valentine’s gift, too.  *grin* A few years ago ThinkGeek sold gift boxes to become a “Laird” or “Lady” as a fundraiser to renovate and help fund the upkeep of Dunans Castle and grounds, in Argyll, Scotland.  You become the owner of one square foot of land, which allows you the honorary title and a free tour if you ever make it there.  Since I am obsessed with Ireland and Scotland I showed it to L to get it for me for Christmas, but it was sold out when he went to order it.  It then disappeared from their site.  To my delight Vat19 has them now!  I didn’t want a repeat of last time, so I ordered that gem with the wild foods.  No matter how raspy my voice gets when the bronchitis kicks up a coughing jag, I am still officially a Lady.  *smirk*  I know it’s similar to paying for a star to be named after me, but hey, I get to say I own a little property over in Scotland and be a Lady, even when I’m in sweats and a beanie cap.  *laugh* 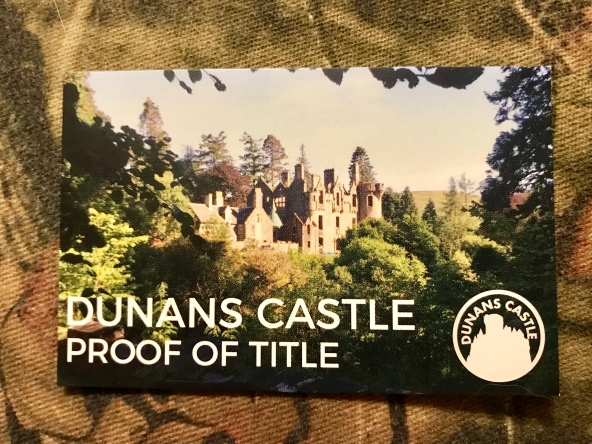 Now I get to wave Scotland’s Saint Andrew Cross flag along with my nerd flag!

All in all it was quite a fun online shopping trip and within a month I became a titled land owner.  *grin*  Cross your fingers that Kiddo will be into the idea and I can get a lot of pics of a wild taste test! In the meantime I need to stop flipping back to the Vat19 site and thinking about ordering some ferrofluid to stash away as one of Kiddo’s stocking stuffers…