I had taken a picture for myself of preparing to paint. I think it’s kind of cute so I’m popping it up here. I started with a drop of each color I was going to use, although a few needed more than one, plus a bit of water for thinning when needed, and a paper towel for dabbing at bad accidents and cleaning the brush. If you ever paint soaps load the brush with the dye. It will seem like way too much and at first you’ll worry about dying the skin, but it looks the best for the ornaments and after testing I found that I didn’t have any problems with the dye. The shower keeps it from sitting on the skin.

I am beyond excited at how the cookie sandwich soaps have turned out so far. I was shooting for a chocolate brown color, but the brown pigment I have wasn’t looking overly chocolatey, so I added the tiniest dash of black matte powder. I had never used powder coloring before, but of course I had researched and knew that a tiny bit goes a long way. I didn’t realize that a sixteenth of a teaspoon was a lot in this situation. Lol. I was kind of upset when I was whisking the batch and saw how dark the soap was turning, but you know me and waste…I decided to pour them and I could remelt for something else later, but they’d be in handy wafers instead of a massive clump. As they began to set I noticed that they continued to darken (I think it was actually the settling of everything from all of that whisking since it took awhile to incorporate the powder). I’m so happy with them now though! They look like chocolate grasshopper cookies or York miniatures. I can’t believe it. I still need to make the frosting to sandwich and I’m going to let that look rather whimsical so that these don’t look too realistic. In the picture they’re a little glossy, but that will dull in a bit. I had a lot of trouble getting them to release from the molds and popped them in the freezer to contract, to unmold. Yeah, um…*blush and suddenly looking all around* I popped them in as I prepared the supplies to paint the trees and I lost all track of the entire world once I started painting. After I was down I was on cloud 9 and got on SL for a couple of hours. I came out to make my tea and was tidying up when I saw an empty mold sitting on the counter. *facepalm* I ran over and yanked the wafer molds out of the freezer. I had left the tree mold on the counter since I was going to add the wafer ones after the ten minute cool down, so I’d only do one round of equipment washing (I take extra measures for that, so it’s a real pain to do it in multiple rounds). Thankfully these soaps won’t be ruined, but I need to let them slowly return to room temperature. If the condensation stays on them I run the risk of the fuzz popping up on them. It’s a common issue that occurs because glycerin is a humectant, so it draws water from the air, and then whatever itty bitty particles are in the air stick to the moisture, making the soaps look fuzzy. The fuzz can sometimes be wiped off carefully with a damp towel, but that can leave a mess too, and I’d rather write off a soap’s cost than sell something that I’m not proud to have my name attached to. So, I’m going to set an alarm next time I have to use the last resort of freezing a mold. Lol. Anyway, I think they’re adorable and can’t wait to make (and post) Part 2. *grin* Let’s hope that part turns out well too! 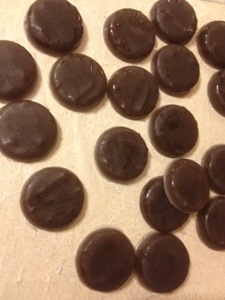 Posted in Soaps and tagged Homemade, soap. Bookmark the permalink.

I have to admit that I’m really happy with these soaps. It took awhile to get the hand painting down, but I loved every moment of it. *cheesy smile* For once I even like that they’re not perfect – it adds to that happy, homemade vibe I think. I will try to darken the tree color in the next batch though. When I started the pour I noticed that because the molds are so shallow the soaps are lighter than it looked when it was in the measuring cup. Some days I have big brain farts. Lol. I also think that I’ll trim off the tree stumps. They’re actually where lollipop sticks should be placed for making lollipops (it’s really a candy mold) and since it’s so shallow I’m having a problem with them breaking off. I think that it might work out better if I just take them off and not worry about it. They’d be a LOT easier to package too! Lol. I’m still stumped over that part. They’re really big, so they don’t fit in any crafter bags and I really don’t think a gallon size ziploc would look overly professional. *grin* I may end up with that holiday colored Saran Wrap I guess. I’m always up to hearing ideas if you want to share. *smile* Anyway, I hope you like these too. 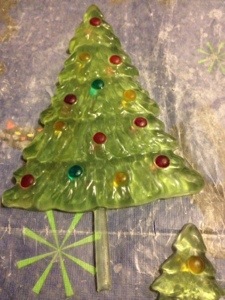 Posted in Soaps and tagged Homemade, Soaps. Bookmark the permalink.

Cheesy, I know, but I couldn’t resist. *grin* I embedded those small glitter flowers in pairs in cute bars with even more glitter. I’m not much of a glitter kind of girl, but I’m loving these glitter soaps. I had some over pour and used that for some more flowers to embed. 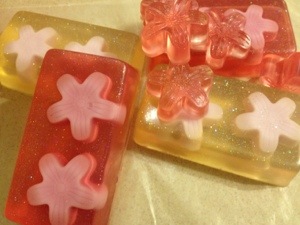